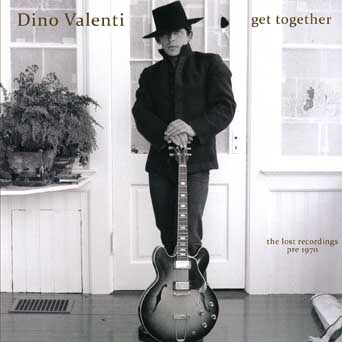 Splendid news reaches us of some lost Dino Valenti recordings about to show the light of day. I first heard ‘Time’ on one of the Rock Machine comps a very long time ago and was pleased to get the Epic album on CD when Koch put it out at the back end of the 90s but as you can read form the press release this is a fascinating prospect:

Who would have thought that Philadelphia record label ItsAboutMusic.com would uncover lost music from legendary Quicksilver Messenger Service lead vocalist Dino Valenti, and the quality would be this good? And when we say “lost” – we really mean it. The tapes used to form this new CD ‘Get Together’ were found in a storage unit in northern California by some very nice people who just knew that this music was valuable without even hearing the tapes. They figured out how to reach Dino’s son, Joli and the rest is history in the making.

This CD marks the very first time that a Dino Valenti album offers his own recording of his song, “Get Together” (made more than famous by The Youngbloods). It also features covers of “Midnight Rider” (Gregg Allman) and “I’ll Try Something New” (Smokey Robinson) which are both stellar performances. But the true gems on this album are the original tunes that were recorded back in the early to late Sixties. How did this music survive all this time and sound so cool? And since the recordings have been literally lost, it’s a question as to who’s playing on it besides Dino. Some of the tracks sure sound like Quicksilver Messenger Service – you decide.

In the early 1960s Dino Valenti performed in Greenwich Village coffee-houses, often with fellow singer-songwriters Fred Neil, Bob Dylan, Lou Gossett, Josh White, Len Chandler, Paul Stookey (of Peter, Paul & Mary) and others, influencing other performers including Richie Havens who continues to perform some of Dino’s early songs. By 1963 Valenti had relocated to Los Angeles where folk-rock had already become popular. During this period he wrote his best-known song, “Get Together”, a quintessential 1960s love-and-peace anthem that was later recorded by Jefferson Airplane and became a major hit for The Youngbloods.

Valenti moved north to the San Francisco Bay area where after working with several groups, played in an early line-up of the San Francisco psychedelic rock group Quicksilver Messenger Service featuring John Cipollina (guitar), bassist David Freiberg, and Jim Murray (harmonica/vocals). Dino later rejoined the group in 1970 as its lead singer and main songwriter. In the late 1960s he signed as a solo artist with CBS Records, releasing an eponymous solo LP. He traveled with Quicksilver’s Gary Duncan to New York in January 1969 to form a new band to be called The Outlaws, while Quicksilver’s noted album ‘Happy Trails’ album was released in March. While Valenti and Duncan were in New York, British keyboardist Nicky Hopkins joined Quicksilver for their third album, ‘Shady Grove’ (December 1969). Eight of the nine songs on the group’s next album, Just for Love (August, 1970) were written by Valenti, six of them under the pseudonym of Jesse Oris Farrow. He remained the chief songwriter on their next album, in December, ‘What About Me?’. Despite occasional personnel changes, the band released ‘Quicksilver’ (1971) and ‘Comin’ Thru’ (1972) before disbanding. The 2-LP ‘Anthology’ was issued in 1973 and a tour and the album, ‘Solid Silver’, appeared in 1975.

Quicksilver Messenger Service first gained popularity in San Francisco’s Bay Area, and then the rest of the world through the release of their critically aclaimed albums. Several of the group’s LPs reached the Top 30 on the Billboard Pop charts. With their jazz and classical influences, as well as a strong folk background, QMS attempted to create a sound that was individual and innovative. Dino Valenti drew heavily on his early folk music influences. According to John Cipollina, “It was Valenti who organized the group. I can remember everything Dino said. ‘We were all going to have wireless guitars. We were going to have leather jackets made with hooks that we could hook these wireless instruments right into. And we were gonna have these chicks, backup rhythm sections that were gonna dress like American Indians with real short little dresses on and they were gonna have tambourines and the clappers in the tambourines were going to be silver coins.’ And I’m sitting there going, ‘This guy is gonna happen and we’re gonna set the world on its ear.’ ”

Dino Valenti passed away in 1994. According to his son, Joli, his father recorded a multitude of songs that were never released. The songs on the ItsAboutMusic.com release, “Get Together” were recorded during the period from 1964 to 1970 but were only recently found in a storage area in Northern California. In an effort to be authentic, ItsAboutMusic.com licensed the cover photo from Herb Green who is famous for taking the cover shot for Jefferson Airplane’s ‘Surrealistic Pillow’. The song “Get Together” was never released on a Dino Valenti or Quicksilver album. Its only appearance came on the Rhino box set entitled ‘Love Is The Song We Sing’ – a 4 CD collection of recordings by Bay Area artists from the Sixties.

Look here for song samples and more info regarding Dino Valenti’s ‘Get Together’: