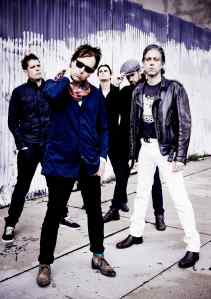 Earlier this year Chuck Prophet and backing band styling themselves the Spanish Bombs toured Spain playing The Clash’s London Calling album in its entirety. This was the second such enterprise enterprising Spanish promoters had initiated as a little while before Howe Gelb had toured a performance of Johnny Cash’s At San Quentin. The difference is that while Howe didn’t then go to San Quentin, Chuck is now bringing the enterprise to London and beyond: “It’s our contribution to Guy Fawkes Night. The Gunpowder Plot lives on in our gentle hands.”

Chuck’s performing the whole double album, from start to finish, at four UK shows including the Garage, less than a mile from where London Calling was recorded at Wessex Studios – or a mere 5 minutes “on the route of the 19 bus” in Highbury. Clash tour manager, Johnny Green, who oversaw the demoing and recording of London Calling, will also be reading from his book A Riot of Our Own (a memoir of his time with the Clash) before each show.

Johnny said of London Calling: “London Calling was conceived & written by The Clash touring the highways, byways ‘n’ freeways of the USA. The tunes were hatched back in a dingy garage, down by the river Thames. The wholeness was polished, with Guy Stevens, in a Highbury, London, studio, plus furious Stateside gigging. It suits here, there and maybe the whole world. Chuck Prophet has perfectly caught the essence in his re-interpretation, like some rockin’ jazz singer while sometimes he rides along true to the originals. I recently toured Spain with Chuck and watched every show from start to finish so I was there too.”

That January Spanish tour sold out nine of the twelve shows, as well as selling out two shows in San Francisco. The suitably impressed SF Gate gushed:“Once again, Chuck proves he’s got singing chops, goo-gobs of guitar-playing skills, charm to spare, fashion sense, and the instincts of a svelte cheetah.” As on previous dates in London he’ll be joined by West Coast power pop legend Chris von Sneidern who’ll be Mick Jones to his Joe Strummer.

Chuck’s releasing a DVD of the Bilbao, Spain show which will be sold on this tour. His final comment before take-off: “Guy Fawkes, Guernica, The Clash. We’ll light the fuse. Plenty of matches, plenty.”

Saturday 23 July London The Relentless Garage with The Strummerville Band