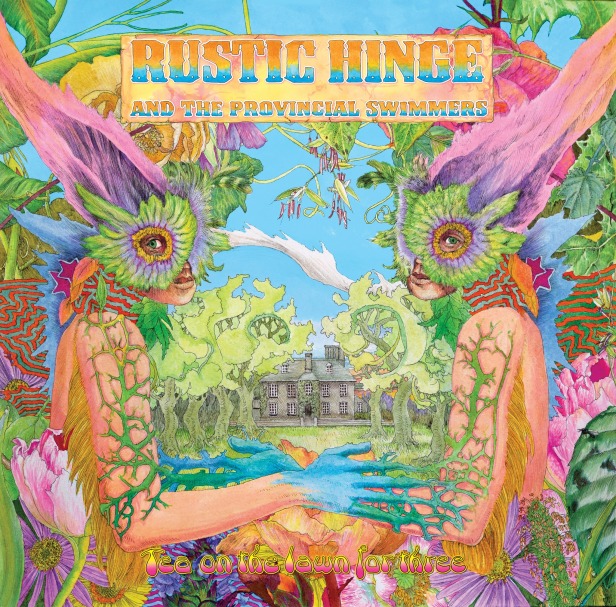 The West Country can be a strange and mad place. It surely was in those wild counter-cultural days as the 60s slid into the 70s. Arriving in Bristol in late 1971 for what proved a five-year stretch I crossed paths – in cider pubs, occult bookshops, venues, and record shops – with all manner of characters touched and changed by their doings during those times. Similar doings likely rubbed off and left their mark on me.

This extraordinary artefact hails from that milieu, fleshes out a tale that’s been retold a few times in various under-the-radar settings, and given three of the central protagonists are now dead perhaps now tells the definitive story. It rescues lost music and presents it as it was originally meant to be, before temporary silliness and pique took hold, making good on renewed but shelved intentions. It’s music weird, crazy, and magnificent, possessed of truly creative, psychedelic madness. To frame it as an English Trout Mask Replica is on the money, though along with the Magic Captain, Bartok and Stockhausen will be pleased to hear they are cited as influences, and there’s elements of post-war radio comedy too.

I first met Rustic Rod Goodway in the late 90s at some Ptolemaic Terrascope-related event though I’d known of Magic Muscle since my days in Bristol. By then he was part of a rural West Country cohort based around Calne and Melksham, selling records by mail-order and still playing out a bit. Over the following years I would gradually pick up elements of the Rustic Hinge tale, and hear the Reckless Records release of Replicas from 1988, but I never knew Rod well enough to get the whole story, or indeed read Paul Ricketts’ retelling of it in Unhinged. Thus it remained a bit of a shrouded and unexamined hippy legend even with my relating to its Bristol element.

Over the last couple of months that has changed and the spur has been this remarkable release; a beautiful double-album in a John Hurford-designed gatefold sleeve (John’s designs are always exceptional but this is above and beyond), remixed and mastered by Tony Poole, with the guiding hands of Colin Hill and Nigel Cross steering the project. Sadly Rod didn’t live to see its release, cancer took him last spring, but he had seen the elements before he passed, and provided notes which appear on the cover. There is plentiful and valuable commentary too from Colin and Nigel , along with a reproduction of a contemporary Friends article by Charles Radcliffe.

The story can begin with The Crazy World Of Arthur Brown; Andy Rickell (guitar) and John Theaker (drums), along with Ade Shaw (initially as roadie but then bassist), had joined up with Arthur at his Ilsington Farm base, near Puddletown in Dorset. However Rickell and Theaker’s eccentricities quickly drove Arthur away; they’d rechristened themselves Android Funnel and Drachen Theaker, and exasperated Brown by contriving to invariably play too fast or too slow. Thus in Summer 1970 Rod received a telegram at his Bristol squat – 49 Cotham Road – asking him to contact his old bandmate Rickell.

The pair, together with Ian Bowden, a former GPO engineer and all-round boffin, were now addressing their own musical obsessions and needing a singer called up Rod. Goodway already had an intriguing CV including The Pack, The Artwoods, White Rabbit – who’d opened for Captain Beefheart at Middle Earth and sometimes featured a young Linda Lewis – and J.P. Sunshine which Rickell had also been part of. When they heard he was currently listening to the Captain they knew he was their man.

Rod and his girlfriend headed down to Dorset, and they all settled in for a rural idyll. It sounds like a mad summer dream, and the accounts and the surviving footage (by pure chance the BBC filmed them as part of a Thomas Hardy documentary) support that thesis. They made some recordings, they played in the garden, and they took some drugs. Nothing held together very long, and Goodway and Shaw would eventually head back to Bristol to form Magic Muscle, but enough was retained that Rickell and Theaker could then work with and enhance. What you hear over these four (or six if you get the bonus disc) sides are what remained on tapes Theaker sent to Goodway in the late 80s with a view to a reissue that never happened; though in 1988 Reckless Records did release Replicas under the name Rustic Hinge, which is some of this stuff retitled, and other recordings with High Tide who were then living down the road, and no Rod involvement.

The name Rustic Hinge And The Provincial Swimmers was dreamed up by Rod, and the swimming bit is so apposite because this is really a case of just diving in and seeing what the water’s like (and what it’s been dosed with!). The various titles are that part of the iceberg you can see above water; it’s a bit of a puzzle getting your head round it all – especially with Replicas added to the mix – but definitely worth the effort. Essentially Sides 3 and 4 are 4 Forks or T On The Lawn For Four which is a sequence of recordings, with Rod’s vocals retained, as set out by Drachen Theaker (his pages are reproduced on the sleeve).

It’s fourteen discrete tracks, some long, some short, Rod is excitably present on ‘Lychee’, ‘The Coming Of Dawn’, ‘Fly Brothers’, and ‘Burn The Seeds’; it’s gripping stuff, on ‘Fly Brothers’ he very much reminds me of Hammill. It’s also him, in different capacity, on ‘The Coming Of The Flood’. There’s some spoken word – as BBC-style announcer, and author of Revelations – from Bowden, and instrumental tracks such as ‘Music For Two Fenders’ and ‘Music For Drums And Ring Modulator’ – which – you’re warned – are exactly what they say they are; Funnell had got himself the Ring Modulator and he liked to use it. There’s also the eleven-minute assault of ‘Lawnmower In D’.

These are the sides that might have surfaced in the early 90s. Side 1 meanwhile might have appeared in the early 70s. It’s a single instrumental sequence T On The Lawn For Three edited from the 4 Forks tracks and running order, with all trace of Rod removed after he fled back to Bristol. The plan was to put it on one side of a Dandelion album; John Peel having taken an immediate interest in something so blatantly Beefheartian. It would have been a memorable record as it works incredibly well, and with shorter tracks on the other side would follow a familiar pattern set by inter alia Meddle and Da Capo.

Side 2 then stands as a delve into Rod Goodway’s back pages; an overlooked J.P. Sunshine track ‘Dirt Blues’ and some late 60s demos including a less-adorned take on ‘Fly Brothers’, and ‘Into The Night’ which was also later recorded with Rustic Hinge but lost in the mists of time. Plus there’s a long sound collage from Rickell – ‘Droid’s Inspirational Symphony’ – which Colin Hill rightly dubs an early mash-up.

But that’s not quite all as when Dandelion came calling Android and Drachen contrived the plan that T On The Lawn For Three should play backwards, in as much as the record should play from its centre outwards. Of course that never came to fruition but now it has. There’s a bonus disc featuring a restored ‘T On The Lawn 4 4’ with Rod’s vocals reinstated which thanks to the good offices of cutters extraordinaire Graeme and Lewis Durham does play, as conceived, from the middle. I’ve tried it and it works. As all the music it contains is on the main package you don’t absolutely need it, but I think if you’ve lasted this far you probably do; and the sleeve is adorned with more Hurford artwork. 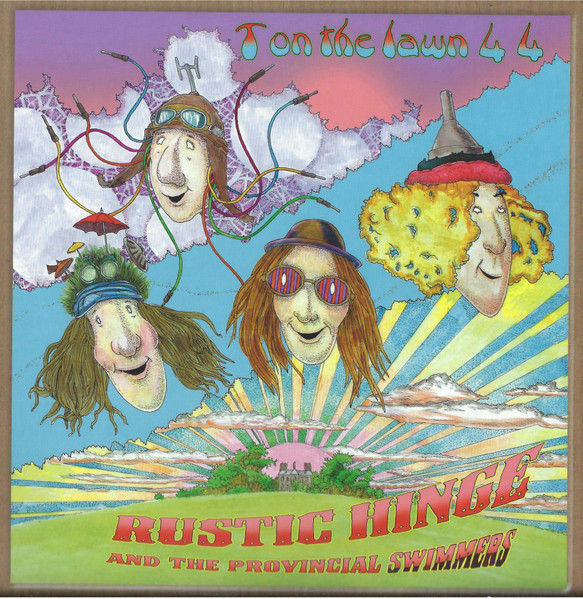 Of course it’s mad, it’s downright fucking loopy, but like Trout Mask Replica and The Faust Tapes and Gong and you name it it’s just brilliant that it happened, it existed in time, and now thanks to High On The Pygtrack and Thylacine it exists in perpetuity. Hopefully the people who need it will find it.

As Andy Rickell told Charles Radcliffe in the Friends feature: “There’s a chain of madness: The surrealists, Cocteau, Stravinsky, Bartok (his string quartets indicate that he was a violin in a previous life), Stockhausen, Captain Beefheart. It’s not MAD madness, but it’s not always calm clarity. I’m part of the chain. I have to know that I’m part of it in order to survive.”

Currently the album can only be purchased via Discogs though in time both High On The Pygtrack and Thylacine will be selling it through their websites. You can read the Unhinged article here, and an illuminating interview with Rod Goodway here. The BBC Thomas Hardy documentary is viewable on YouTube where you can also find Replicas.