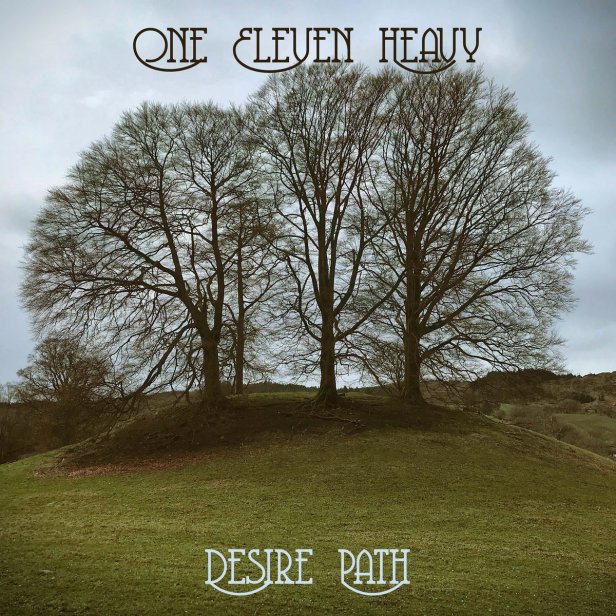 “I wanted to try to write a mid-tempo New Orleans funk a la Allen Toussaint, kind of a cautionary music business tale. At the same time I was trying to write something in the gambling/card game bag and also wanted to get one of those tumbling down the stairs Huey Smith And The Clowns piano licks in there, so that’s what ‘House of Cards’ is.” – Hans Chew (keyboard/vocals)

‘House Of Cards’ is the second track to surface from the new One Eleven Heavy album Desire Path due to be released on 20th September 20th on Beyond Beyond Is Beyond and now available to pre-order via bandcamp. YouTube clips of both it and ‘Mardi Gras’ are posted below.

The band’s had something of a rough time over the last couple of years. On the final day of sessions for their debut album, Everything’s Better, bass player Dan Brown was hospitalized after being crushed by his own bass rig. And on the final day of their debut American tour when the band was almost wiped out after an allegedly ‘shitfaced’ driver rear-ended their van at high speed somewhere in Delaware, on the way to a gig at Chris Forsyth’s Philadelphia venue Jerry’s On Front.

So the new album is a wry, occasionally biting, but always joyful celebration of human endurance and the ability to overcome. Nick Mitchell Maiato’s opener, ‘Chickenshit,’ deals with lazy acquiescence to attention-seekers. Pianist-cum-drummer Hans Chew’s first songwriting contribution to the band, ‘Fickle Wind,’ externalizes the band’s raison d’etre by questioning society’s drive toward constant change. Meanwhile James Toth fires off image-laden witticisms about the unnecessary difficulty of human interaction in ‘Too Much, Too Much,’ mocking fashion-conscious Marxists at the same time as he laughs at his own “cacti-withering row(s) with (his) old man”.

The musicianship is a step up from their raggedy, but already accomplished, debut, too. The album is laced with lush three-part vocal harmonies and two-part harmonized guitar licks, recalling those classic Allman Bros runs at the same time bringing to mind timeless classics by Hendrix, the Stones and, of course, the Dead. Brooklyn, NY-based pedal steel player John Bohannon guests on a couple of tracks. Guitarist Nick Mitchell Maiato reaches new levels of guitar heroism on closing track – the Santana-esque ‘Three Poisons’. Meanwhile pianist Hans Chew also takes on drummer duties in the absence of regular hired hand Ryan Jewell who couldn’t make the session and more than earns his keep. The rhythm section of Chew and Dan Brown swings so hard, it almost doubles over on itself!

So starting off, this is kind of a supergroup; James Jackson Toth of Wooden Wand, Nick Mitchell Maiato of Chalaque, the amazing keyboardist Hans Chew of Open Sea fame, Dan Brown of Royal Trux, and Ryan Jewell who drums for Ryley Walker. They’re playing a music they’ve designated ‘prog-regressive’, meaning they’re building something new on past foundations proven to work spectacularly well.

Those foundations would be located in the early 70s with the Dead, Little Feat, and others from that cohort of real Cosmic American musicans, and while you can identify where they’re coming from, you’re left gobsmacked by this most vital of musics, and one of the most exciting releases of an already rich year.

Eight tracks with two being segues. ‘Old Hope Chest’ runs straight off into Dead territory, highlighting Chew’s dextrous piano and then unveiling some shockingly wondrous guitar. ‘Valley Bottom Fever’ announces itself with mighty Garth Hudson organ, suggesting The Band riffing off Neil Young’s ‘Thrasher’. The stately ‘Panopticon Blues’ snakes its way, in its own time, into the sweet, melodic ‘Geneva’. Then finally the zigzagging ‘Dawson Lane’ gradually and inevitably is overwhelmed by a one final majestic guitar solo. Truly uplifting.