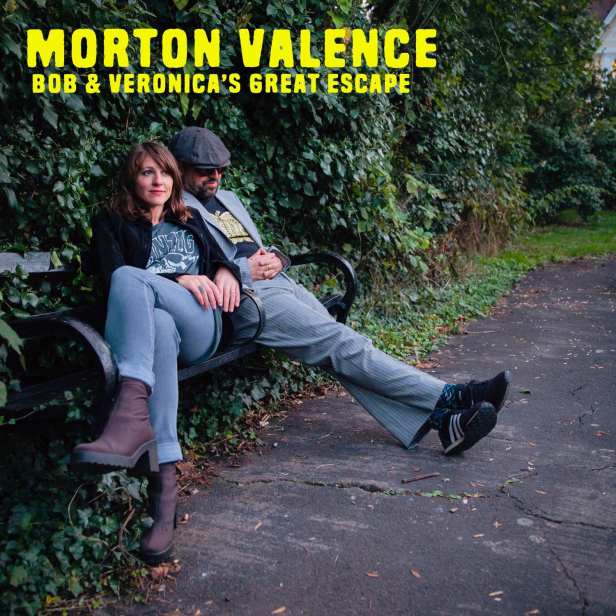 Anne Gilpin and Robert ‘Hacker’ Jessett have been Morton Valence for a good long time now, and Bob and Veronica too. These alter egos allow them space and freedom to invent, exaggerate, and transpose, to venture into imaginary landscapes and locations in which their creative instincts can be best fulfilled. Bob & Veronica’s Great Escape is the latest episode in their story, and it finds them more assured, more at ease in their skins, and makes for, at least initially, a comparatively gentle listening experience.

Their previous release – Europa – had been an unambiguous paean to cosmopolitanism; a deliberate and required statement from musicians who for near two decades have always found succour and support in continental Europe. It had fast followed their interlude as Black Angel Drifter whose eponymous if under-heard album had been a theme to an imaginary western where Leon Payne and Hank Quinlan might have served as the presiding deities.

Bob & Veronica’s Great Escape presents, in the main, a set of beautifully crafted songs, comparatively spare but certainly not wholly jettisoning their opulent, louche lounge tendencies; providing replenishment and relaxation, allowing the listener to drift inside atmospheres, comforted by the contrasting but assured voices. Quite likely there is a reflection here of Hacker’s own personal ‘great escape’ which has seen him relocating to Madrid.

Certainly there’s a sense of a fresh start imbuing the opening ‘It’s A New Morning’; the pair trade verses celebrating a sense of achievement, and joy taken from a settled life, both singing – “I pay the rent, feed the kid, I’ve been clean for the best part of a year” – while also still marvelling at those “ten hundred million tiny little shiny city lights”. Lights that will reappear in both the richer, poppier ‘Goldenlights’, and ‘Pretty Little Crystals’ which carries more than a few rhythmic tinges of Hacker’s adopted home.

Meanwhile ‘Hey Misty’ seems to riff on the Eastwood film, though using it to provide a sense of distance – both temporal and spatial – rather than any real menace. The Californian echoes place it in an imagined past letting it conjure an unfettered, enticing melancholy. In contrast ‘Black-Eyed Susan’ and ‘The Visit’ are Black Angel Drifter tunes revisited, retaining Rough South elements and Alan Cook’s pedal steel.

These usher in a final brief pairing of ‘The Last Segue’ and ‘Mr Whippy’, where a Badalamenti-style instrumental morphs into bullhorn yelling and Beefheartian frictions, proving that while Morton Valence may be making a great escape they certainly haven’t gone soft in the process.