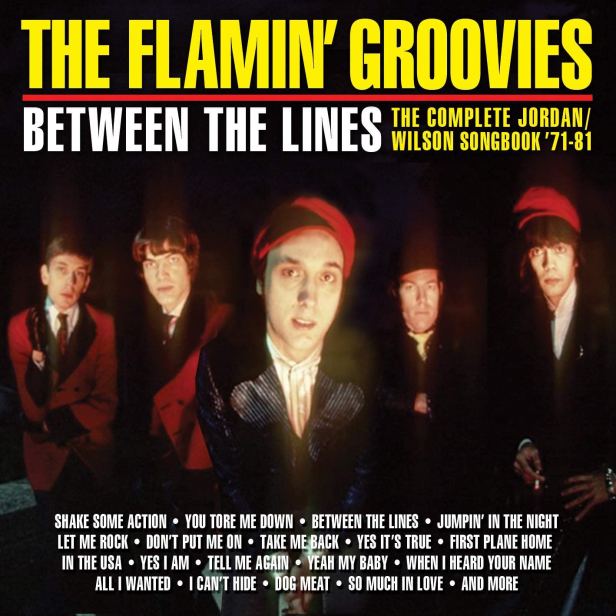 Last weekend saw the release of two Flamin’ Groovies albums from the Australian label Grown Up Wrong! They consolidate rather than provide any new material, and most Groovies’ devotees will own the entire contents already. That said Dave Laing, the instigator of the project, has done a fine job in co-ordinating contributors of the first rank, so I’d say you need these.

We’re looking at the Jordan/Wilson era from 1971 to 1981; the period when the Groovies came to the UK and signed to Andrew Lauder’s United Artists. It was a match made in heaven that never really came to fruition, and while the band recorded with Dave Edmunds at Rockfield only two singles materialised before label and band parted company. It wouldn’t be till 1976 that the immortal ‘Shake Some Action’ finally made an appearance on vinyl.

I’ll Have A… Bucket Of Brains comprises the Rockfield cuts and is the collection originally released by EMI in 1995. Jon Storey’s sleeve notes from then remain, augmented by the observations and reminiscences of Robin Wills of The Barracudas who also imagines a completed Groovies album which, in an alternative universe, United Artists released in 1973. There’s also a piece by Nick Kent originally published in Frendz in June 1972.

There are but eight tracks on I’ll Have A… Bucket Of Brains; Between The Lines: The Complete Jordan/Wilson Songbook ‘71-81 is somewhat more meatier. It’s made up of every Jordan/Wilson composition the Groovies recorded in that second, post-Roy Loney, incarnation. It begins with three songs demoed in Danny Mihm’s flat in late 1971, kicking off with ‘Let Me Rock’ which would finally be re-recorded for 2017’s Fantastic Plastic.

There’s two Sire demos from 1973 – a cut-down ‘Shake Some Action’, and ‘When I Heard Your Name’ which surfaced as the B-side of ‘Move It’ in summer 1978. Then all the originals from the three Sire albums – Shake Some Action, Now, and Jumpin’ In The Night – and finally ‘So Much In Love’ from Gold Star in 1981. This is mighty stuff; ‘You Tore Me Down’, ‘Teenage Confidential’, ‘First Plane Home’; and the list runs on and on.

The booklet for this is pretty essential too, with a long and detailed essay from Laing, an interview with Marc Zermati from Skydog Records, Ed Ward’s piece from Creem in early ‘75, and a load of contemporary cuttings and flyers.

And truthfully don’t we all take any excuse to return once more time to the mighty ‘Shake Some Action’ itself. Years ago I was asked to contribute some thoughts on the song to Blurt but I missed the deadline, so instead it got used about a year later in Shindig. My opinion hasn’t changed in the intervening years:

At first you could, if you weren’t paying attention, mistake it for just another British Invasion pastiche. Many did, some still do, and that’s their loss. Of course that’s what it came out of, but to be this remarkable construction with its myriad of elements. Those shimmering burnished guitars, those plaintive yet assured voices, that ‘top of the world, ma’ confidence that let them make the perfect three minute single that actually lasts four and a half.

It is the ultimate guitar pop record precisely because the guitars are given so much head and allowed to run. It’s half a minute before the voices arrive and a full minute before we actually reach “Shake some action’s what I need”. Then at around 2.15 there’s this marvellous shout of “Whoah” and a full 40 second, sublime instrumental break follows, which could frankly run on forever.

It hits now with a wonderful blend of nostalgia and possibility, but remaining fresh as the day it was made. Those elements were always there though 30 years on we experience them differently. Perhaps saved by its failure to become ubiquitous, it can still pull us up with a tug to the heart when it’s played in a club or at a party. Where there’ll always be another pair of smiling eyes to meet in complicity.

Oh …the drums are perfect too.